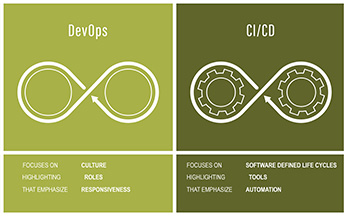 CI/CD and DevOps: What’s the Difference?

DevOps has made it extremely easy for developers to ship their code to the next stage by automating the testing, delivery, and deployment pipelines. CI/CD is one popular DevOps activity that developers actively use to make the development and operations processes quicker and reliable.

However, despite its importance, people often misunderstand DevOps and CI/CD, confuse their parts in the software development life cycle, and use them interchangeably. This article will discuss CI/CD and DevOps and the key elements that make them different from each other.

According to Gartner, DevOps is a change to an information technology culture that focuses on frequent and rapid delivery of services by adopting lean and agile practices in the software development life cycle. DevOps is a collective and collaborative culture that aims to provide a set of best practices, tools, techniques, technologies, and processes that simplify and streamline software development.

Patrick Debois, the Godfather of DevOps, defined DevOps in 2010 as a“ movement of people who think it’s time for a change in the IT industry - time to stop wasting money, time to start delivering great software, and building systems that scale and last.”

Before the emergence of DevOps, there was a significant disconnect between the development and operations teams. Often, miscommunication and lack of collaboration gave rise to complex and complicated production scenarios that were hard to handle and insufficient to fix quickly.

The technology leaders and researchers soon realized that solving these problems would ultimately result in a seamless development ecosystem that can easily adapt to frequent changes, fix them, test, and then deploy them to production. This is how DevOps came into the picture and provided a culture that completely automated and streamlined the concerned processes.

The impact of DevOps was such that the topmost companies in the software space such as, Amazon, HP, Etsy, Netflix, Adobe, Facebook, and Google, have adopted the DevOps culture to ultimately serve their customers by rapidly implementing and delivering software products.

An ideal DevOps culture iteratively embraces at least eight processes that are crucial to automate any DevOps pipeline. These steps include:

The revolutionary part about DevOps as a culture is that it integrates and initiates all these processes automatically and creates an iterative chain that simplifies the development, testing, and deployment processes.

Continuous Integration/Continuous Delivery (CI/CD) is an amalgamation of principles, practices, and activities that enable developers to write code and deploy it frequently. CI/CD is closely linked to the monitoring part of an application. Even a single signal sent out by the monitoring flow can initiate the CI/CD pipeline to redeploy the fixes.

CI/CD is one of the most important activities of a DevOps culture. It entails a set of tools and technologies that make it possible to frequently code, test, build, and deploy the applications. CI/CD has reoriented the traditional deployment procedures and has given rise to a whole new systematic and automated application development paradigm.

The proper execution of a CI/CD pipeline is the most reliable and efficient way today that a DevOps team could follow to carry out the end-to-end shipping cycle of an application. The development teams can even create small features or do minor fixes and timely deploy them (multiple times a day) to create a better developer and consumer experience as well.

Now that we have a general overview of CI/CD as a paired activity, let's talk about CI and CD separately to understand both of them deeply and how they connect to DevOps. Continuous integration is an automated development process that focuses on quickly testing the code as soon as it is checked into the version control system. The most important phase of a CI process initiation is to integrate the code changes into a central and shared repository.

All the developers making changes to the features should have push access to this repository. The central repository is then configured to initiate unit testing as soon as any code changes are pushed into it. Gartner also validates this conceptual understanding of CI and hints towards a roadmap for successful CI automation.

The continuous delivery process, on the other hand, is the process of integrating and monitoring code where the developers are responsible for constantly updating and refining software versions based on constant feedback from customers. Continuous delivery is a continuous process that automates the deployment of code after it has been integrated and tested and is meant for customers to use in production.

CI/CD is a Subset of DevOps

As mentioned earlier, DevOps is an entire culture that has opted for a responsibility to automate the development and operations processes and bridge the gap between the two teams to the fullest potential.

CI/CD, on the other hand, is an integral part of the DevOps culture that focuses on principles and activities that automate the integration and delivery pipelines of a software product.

DevOps is still a research-focused area in the software development domain and has inspired other prospects in the field as well. Apart from just CI and CD, the software industry is finding out ways to incorporate the DevOps culture and practices into the security side of software applications as well.

CI/CD, being an important part of the entire DevOps culture, has the potential to expand its roots to other areas that are adopting DevOps culture. The automation approaches that a conventional CI/CD pipeline proposes can also be tweaked for adoption in other areas such as security and privacy.

On a whole, the aim of both CI/CD and DevOps is to enable developers to write and deploy code faster, be open to customer feedback, and incorporate the customer feedback in an agile manner, and re-deliver the code.

The core difference lies in the fact that DevOps comes as a whole new paradigm shift and introduces a new culture in the software development space,  whereas the CI/CD is a small, yet integral, portion of the DevOps cycle oriented towards practical implementations, practices, and activities.

DevOps Automation: How it Works

The True Current State of DevOps

SRE vs DevOps: Achieving Efficiency and Reliability with Both

7 Traits of a DevOps Engineer