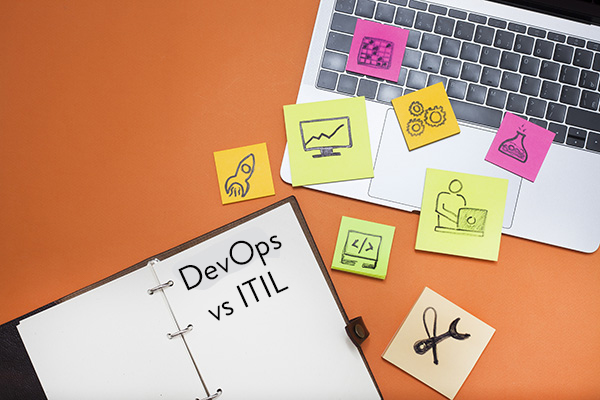 ITIL was emphatically thrown out of the major leagues since modern DevOps came into the ring nearly a decade ago. Or so it seemed. DevOps brought modern and agile methods to keep the development and operation teams in sync. But this did not mean ITIL became useless all of a sudden. There is a reason huge tech companies still use ITIL even to this day.

This research report from Forrester charts the frequency of releases against the usage of DevOps by organizations. There is a clear correlation between employing agile methodologies and how quickly new software is delivered.

This article will explore the merits and demerits of DevOps and ITIL and describe how each of the two can be used to improve service delivery in software organizations. This comparison is often made by pitching the old against the new, but we will advocate for the old. The use of DevOps and ITIL is not mutually exclusive, as we will see.

A term that is raging all around, DevOps is a combination of methods to combine traditional development and operations in one large cycle. And at the center of this cycle is our keyword for the day: automation. By automating as much of the processes as possible, DevOps vastly improves the rate at which new code is tested, delivered, and integrated into the software.

One of the best practices in DevOps is agile development. This means incremental but frequent updates instead of large dumps of newly written code. The former allows bugs to be quickly identified in the latest deployment because they are attributed to the latest changes in code that caused them. This way, each deployment is easier to overlook and smoothen.

ITIL, a name the old-timer will be familiar with, is quite simply a set of guidelines that outlines the best practices for managing IT services and ensuring they are up to par with business requirements. What’s not so simple is that the first set of these guidelines covered more than 30 volumes. These guidelines were iteratively improved upon and divided into different modules. Currently, ITIL v4 is the latest one in use today.

ITIL is still used by companies such as Spotify and Walt Disney largely because of its emphasis on quality of service and creating value for the stakeholders involved. One can look up more of such companies by going to the case studies available on Axelos’ website. This is the organization that manages ITIL and provides certifications. It is imperative to understand that ITIL is a set of guidelines and not standards. An organization can cherry-pick the guidelines as needed.

The bureaucracy established by a set of general guidelines is necessary for certain applications and desired in all of them. BAE Systems, for example, is a UK-based multinational corporation that manufactures munitions and aerospace equipment, not to mention UAVs as well as fighter jets. Developing software for such scenarios requires well-defined and well-tested methods to ensure the output is flawless for mission-critical applications. And this is exactly where ITIL shines.

Customer-driven applications, sometimes termed stakeholder-driven, are another plus point for Team ITIL. As business requirements keep changing, ITIL remains flexible. A key driving principle for ITIL is its focus on value, value for all stakeholders involved, which includes the customers. When an organization focuses on the seven key practices characteristic of modern ITIL, it delivers quality, value-generating service and meets the customers’ needs.

During development, problems do occur. They can range from software bugs to complete hardware shutdowns. Either way, they affect productivity, and for a business, this means financial loss. Problems are specially dealt with in ITIL best practices in the domain of ‘Incident Management’. Incidents encompass every occurrence that hinders the normal workflow. Having a well-defined incident resolution roadmap helps a team get back on track as quickly as possible.

Service Level Agreements, i.e., SLAs, are another ITIL best practice. An SLA is drawn up between a customer and an organization that concretely defines the products to be delivered and the quality. An SLA may include a point such as “issue resolution within seven business days” or “99.99% server uptime”. This helps formalize relations between customers and organizations, which in turn improves customer satisfaction rates. An IT team can sort through the SLAs to prioritize requirements.

DevOps is a modern framework designed to adapt extremely quickly to changing customer and business requirements. As an agile framework, it understands the need to get feedback in iterative deployments and rework the software based on the feedback. The DevOps big picture helps to understand the continuous process that delivers and deploys well-tested and well-integrated changes with agility. This is essential in the modern industry as times change quickly, and organizations must adapt accordingly.

The DevOps approach brings with it an idea of ‘expected failure.’ CI/CD (Continuous Integration and Deployment) is an integral step in the DevOps cycle, and code is never pushed to deployment that fails to pass automated testing. An engineer will sometimes write buggy code, but the most important aspect is the ability to talk about it and bring it to light without placing blame. Mistakes happen, and DevOps knows this all too well.

Finally, as mentioned before, DevOps is fast. An agile approach has benefits in timely delivery as well as risk management. Bugs in deployment are easily targetable, and buggy releases can be rolled back to tested versions that are bug-free.

A Married Approach to Application Delivery

ITIL is the standard for process management of any kind. With ITIL, there are clear and well-defined approaches when incidents occur but cover the A-Z of service management.

There is little need to establish new guidelines for an organization as ITIL keeps it flexible by being general enough that any guideline can be adapted to the specific use case.

Hence there is little need to reinvent the wheel when ITIL has done it all well beforehand. However, a tried-and-tested approach might need some speeding up. And this is where DevOps comes in.

DevOps can help on the development and deployment side of things, which means software can be developed using best practices, incidents managed according to defined SOPs but still keeps pace with transparency in postmortems, automated testing, as well as automated integration.

Furthermore, DevOps is inherently collaborative because developing applications in small increments and features give rise to teams working on them. These ‘agile teams’ work together on a tiny part of an application that could be much bigger.

There is a great need to remove the stigmas surrounding both DevOps and ITIL. DevOps is much more than testing and automation. DevOps is conducive to collaboration and a team culture where not one individual has to be singled out.

Likewise, ITIL is not a big and boring old book that refuses to change with the times. It contains wisdom that is more relevant today than ever. These age-old practices passed the test of time for a reason. They are sound, and they are proven. When combined with the best of DevOps, ITIL can smooth out modern IT workflows instead of hindering them.