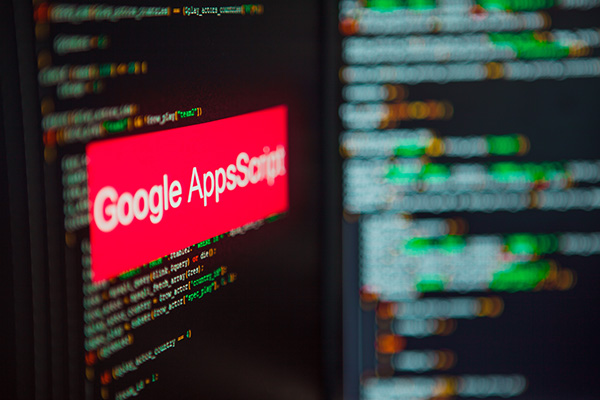 For many businesses, automation is central to achieving success. Yes, programming isn't for everyone. However, at some point, digital content managers find themselves needing to automate repetitive tasks or customize and extend the functionalities of the business’s Google Workspace.

When plagued with several duties and manual tasks such as sending emails to users, aggregating data, preparing budgets & reports, and planning events, it's helpful to take advantage of automation solutions available on the market. One such tool is Google Apps Script.

With Apps Script, you can automate data movement while enhancing the functionalities of business applications such as Gmail, AdSense, Calendar, Google Sheets, Drive, Google Forms, and Google Docs.

In this article, you’ll learn about Google Apps Script and what it can do for you.

Google Apps Script: What Is It?

Apps Script is a lightweight coding platform developed by Google for its Workspace platform. It enables you to build simple apps that integrate with existing tools such as Sheets, Docs, Forms, etc. For instance, you can automatically program Apps Script to send you an email whenever someone submits a Google Form or sends emails to users on their birthdays. For any content marketing team, this can be a great asset. It can be the secret weapon you need to succeed.

Google also provides you with a free cloud-based script editor that requires no download to run them. The script editor acts as a dedicated environment to explore functions and minisites. Google Apps script is based on Javascript and includes user-friendly features for pulling spreadsheets, creating forms, sending emails, etc. It facilitates script creation for users, and since they are online scripts, users can easily run them on their smartphones or computers.

Apps Script relies on the ECMAScript specification, so if you are familiar with JavaScript, you will also be familiar with Apps Script. Of course, most content creators have little exposure to JavaScript but don’t worry. However, Apps Script provides you with built-in templates that allow you to modify its variables to implement the features you want.

Getting Started With Google Apps Script

The hardest part of learning to code is the time and effort it takes to configure and set up the system. With Apps Script, you have nothing to worry about, there’s no software to install since Google provides a web-based editor where you can write and execute code.

Once you open Apps Script, you will be greeted by the editor. You will write and create your script within this editor. When you’re in the editor, you can use a template or write generic function scripts. There is a menu above the editor that gives you the option to test your templates. If you want, you can run, deploy, or debug the script. At the bottom of the screen, you will find an execution log that you can use to identify errors while testing specific functions.

You'll be happy to know that you can also generate independent scripts from within the editor so you're not entirely reliant on the Google platform. Scripts like this can be published as web apps. The services tab provides an API that you can use to connect to other Google platforms like Sheets, Docs, and Forms. With it, you can also have access to the analytics API, Google Calendar, AdSense, and others. Then, you have the library.

According to Google, “the library is a script project whose functions can be reused in other scripts. Through the script ID, you can search the libraries and identify specific assets. The left column menu also contains a file menu to save different types of scripts. You can choose from three formats. One of them is the JavaScript file format. You may also export your template as a library or service. It enables you to customize templates for individual applications.

What Can Content Authors Do With Google Apps Script?

Google Apps Script provides content creators with several features and benefits they can leverage to enhance the content creation process. In this section, you’ll learn about some of the use cases.

With mail merges, you can automate the process of assembling an email template by obtaining the recipient's email address, name, and other details from a data file. These data files are typically spreadsheets or databases that contain information about the recipient, like their name and email address. Your email template is automatically updated with this data when you initiate a mail merge.

If you send mass emails using mail merges, you will save a lot of time as you are not manually entering recipients' email addresses.

When generating user information from a form submission, it’s always a good idea to implement them in a spreadsheet. Unfortunately, it can take a lot of time to manually import and save this data. With Apps Script, you can automate the web app or form to feed data into a Google Sheet. Some of these can include creating a PDF copy of the spreadsheet data and emailing them to the users.

You can also save image files directly into Google Drive and display the thumbnails in a spreadsheet. In addition to all these, you can analyze the data and build an analytics dashboard that displays the data in real-time and share it with others.

Tracking content performance is a core part of any content strategy. With Apps Script, you can create a dashboard that enables you to connect a Google Analytics account so that you can track social media performance data, website usage, and automatically email you a PDF screenshot at the end of every day.

It allows you to strategically gather data from multiple sources and combine your organization’s marketing efforts with performance metrics. To do this, you can build small algorithms to help filter and gain insight into thousands of data sets.

With Apps Script, you can create a simple HTML interface through the HTML service. It allows you to deploy web pages that can interact with other server-side functions within Apps Script. As a result, you can build custom web apps and user interfaces in Google Docs, Forms, and Sheets. Additionally, you can even use it to compose emails.

Any business prides itself on its efficiency. That means maximizing productivity as much as possible by automating as much as you can. Thanks to an abundance of tools and ready technologies, you can achieve this. Google Apps Script is a valuable tool for any content coordinator due to its simplicity and readily available templates.

Now you know about Google Apps Script, be sure to enhance productivity and get more from your Google Workspace by automating repetitive and time-consuming tasks wherever necessary.

How to Budget for Marketing Operations

Tracking KPIs - What Can Marketers Learn From Developers